Earlier this year, I did what turned out to be my most popular blog post ever, in which I posed like women in various urban fantasy covers to try to point out some of the problematic aspects of said covers.

I’m certainly not the only one to talk about these issues. Tor.com did a post just last week: Hey Everyone – Stop Taking This Picture. As usually happens in these discussions, some people responded with, “What about romance covers?” and “Men are objectified too, you know!”

Well, sure. Men can absolutely be objectified too. But is it the same kind of objectification? Are we contorted into similarly painful, impractical, and improbable positions? Is the posing of men in book covers really equivalent to the posing of women?

There was, of course, only one way to find out… 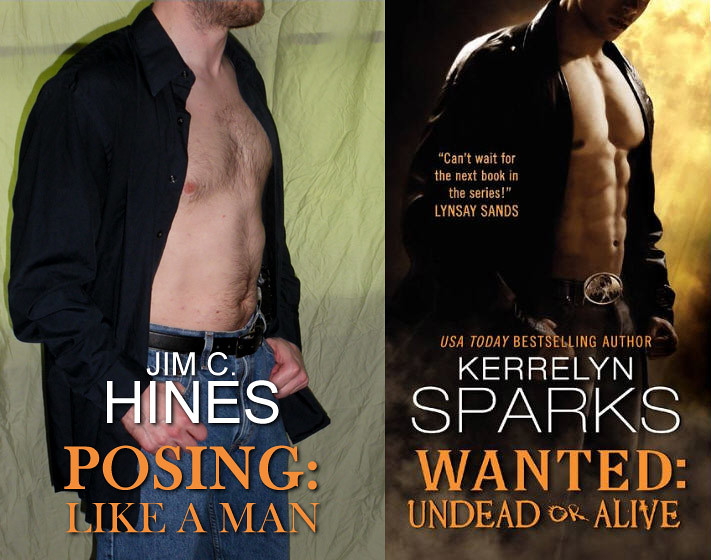 Given the number of books out there, you can find a cover to “prove” just about any point. I tried to pick representative examples of romance, paranormal/genre romance, and Conan covers for this post. These covers are all from larger publishers, and with the exception of the Conans, I believe they’re all from relatively recent releases.

I was a bit surprised to see that men do get the head-chopped-off treatment fairly often, as you can see below, though I don’t know that it’s as common as it is with women.

When I tried my first female pose back in January, the first thing I noticed was pain as my muscles protested what I was trying to do to them. By contrast, my first pose here was a piece of cake. While I don’t typically stand around all day with my shirt unbuttoned, the pose above felt relaxed and fairly natural.

The second pose was almost as easy. 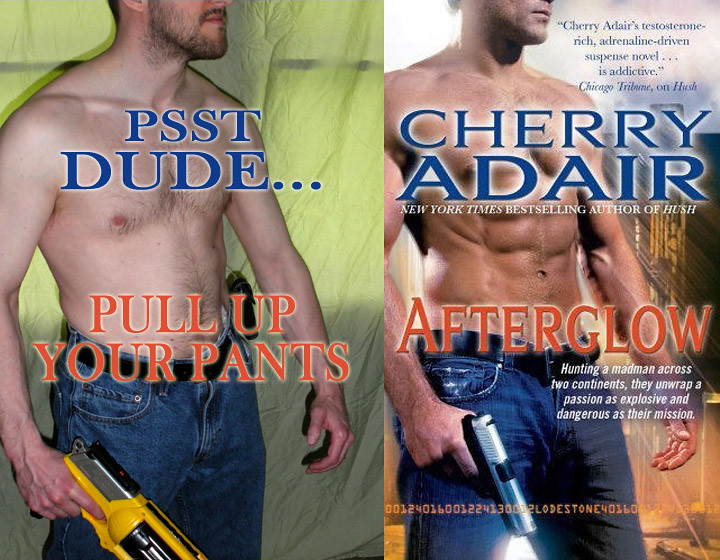 Once again, we’ve got a nicely chiseled body (at least on the right), but aside from having to put my right arm back a little further than I wanted, it was a pretty natural pose.

Off-topic, am I the only one who looks at that dude and thinks his belly button is fleeing up his torso?

I did find a book cover that came close to the pose they were talking about in the Tor.com post. 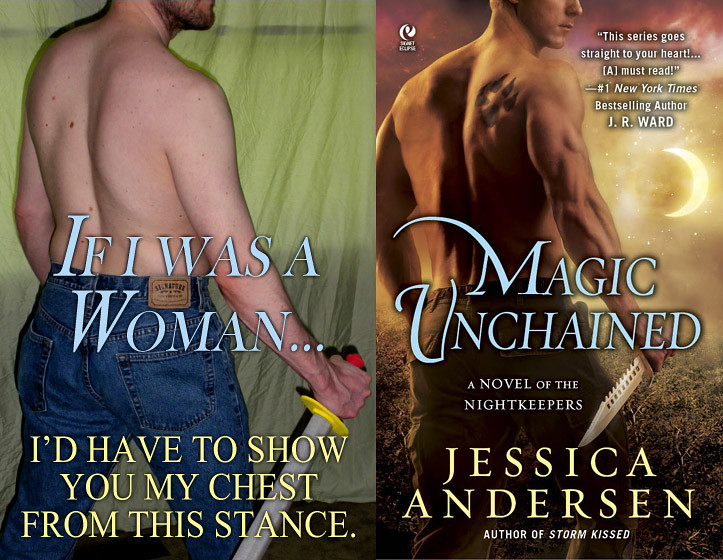 A few thoughts about this one. First off, as noted in the image, if I was a female I’d be expected to keep my butt on display while twisting my spine enough to thrust my breasts at the viewer as well. As a guy, I can just stand there and pretend to look muscular. Also, most of the time when I see women posed like this, the butt and breasts are highlighted. If you look at the cover for Magic Unchained, his butt is mostly in shadow, with text further obscuring it.

Let’s move into “true” romance territory and see what happens… 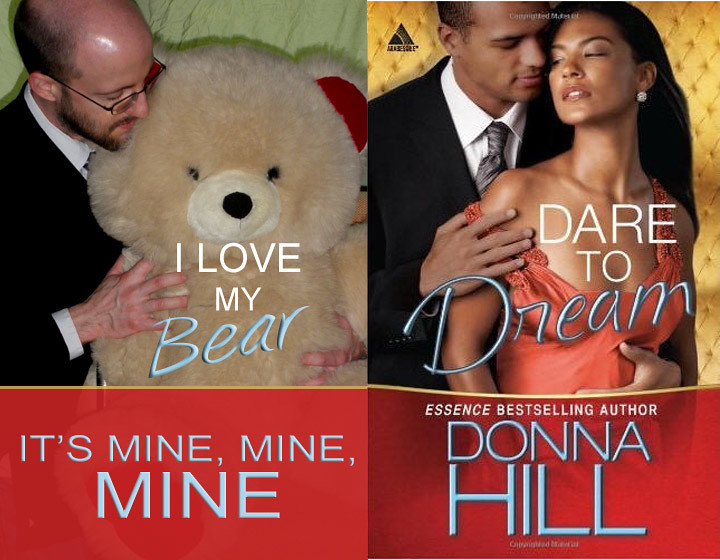 First of all, I went to all that trouble to don a Snoopy tie, and you can barely even tell! Sigh. And for those thinking, “Wait, didn’t Jim say he doesn’t own a suit?” I don’t. That’s my karate gi.

Anyway, I put this one up because I found a surprising number of covers with fully dressed men. I guess men are allowed to be attractive with their clothes on.

In this case, you’ve got the man holding on to his woman (given his stance and posture, the possessive is intentional), slipping off her dress. The dynamic here is pretty clear, yes?

But let’s get back to the shirtless dudes! 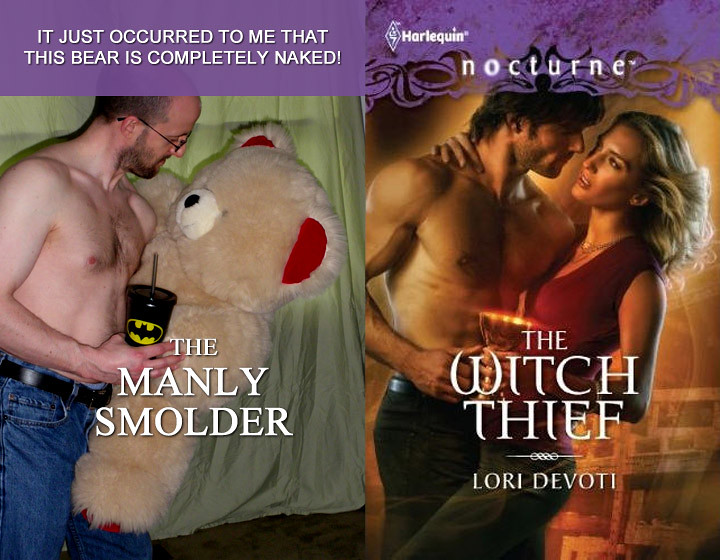 Okay, so this time the woman is fully dressed and the man is topless. But he’s still very much the dominant one, holding his woman to keep her from toppling over backward.

Is anyone else starting to see a pattern here? Men on covers show off the abs, pecs, and arms, but always in a position where they appear powerful.

I couldn’t do romance without at least one classic Fabio cover. 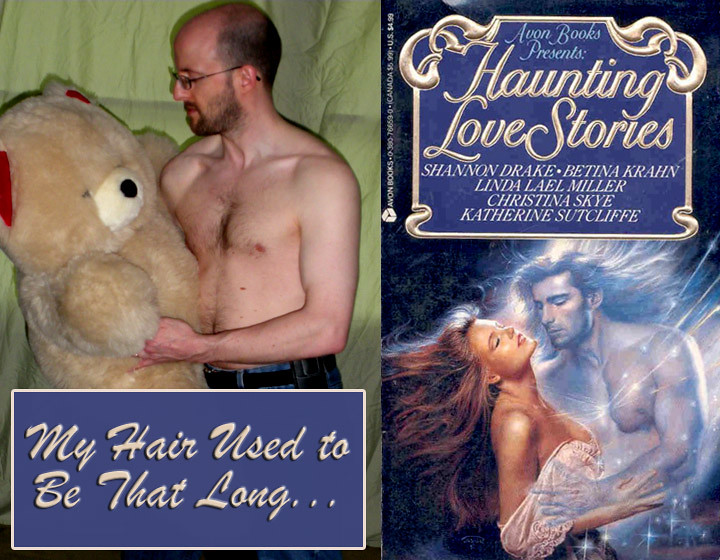 Same thing. Both the man and the woman are showing skin, but the man is the one in control. He’s powerful; she’s helpless in his arms.

I also decided to try a few old-school Conan novels, as these are also mentioned from time to time as examples of objectification of men. 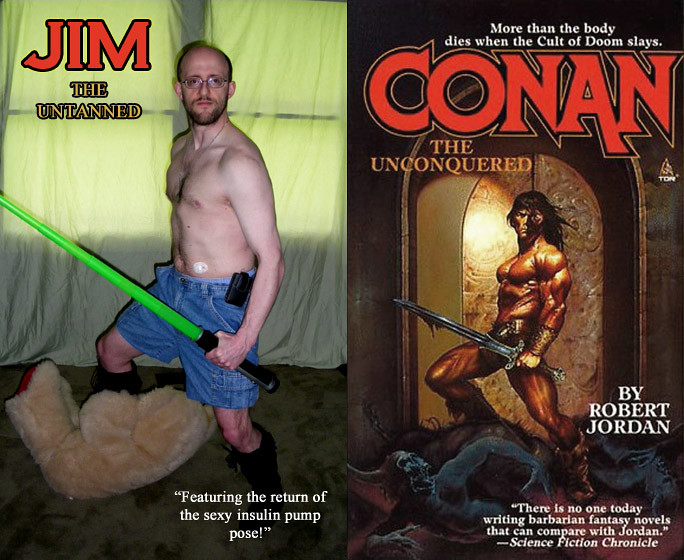 Showing off the body, yes. But in a powerful, I’m-gonna-kick-your-ass-and-feast-on-your-pancreas kind of way. There is a little contortion going on here, trying to show off those pecs, but it’s nowhere near the level of twisting I remember from my female cover poses.

ETA: I can’t believe I missed the, um, “overcompensatory” positioning of Conan’s sword in this one. Teenage me is so disappointed. 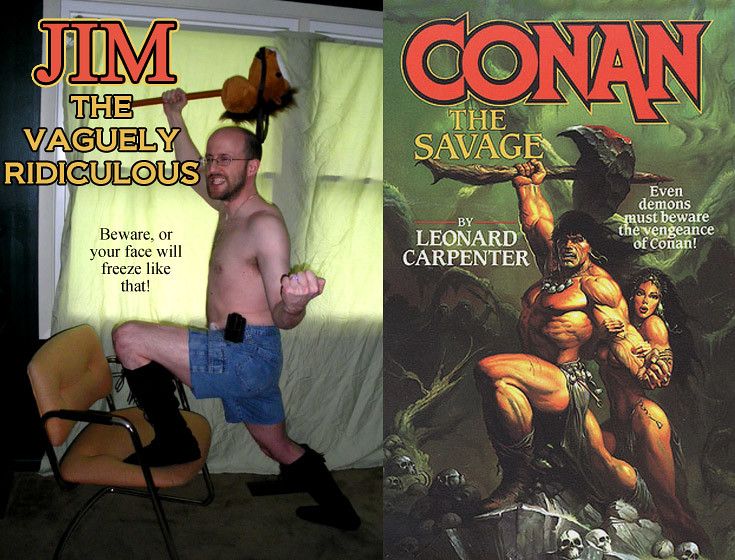 This was the first pose that caused some pain, and I didn’t get it quite right. (Though the pain helped me with my barbarian grimace.) I’m still not sure what’s going on with his waist and hips there. But the distortion you get with Conan is matched by the woman clinging to his arm, who is bulging in bad-comic-book proportions as she waits for her man to protect her. I would have tried to do her pose as well, but I suspect doing so would have put me in the hospital.

I did a better job with this next one, though. 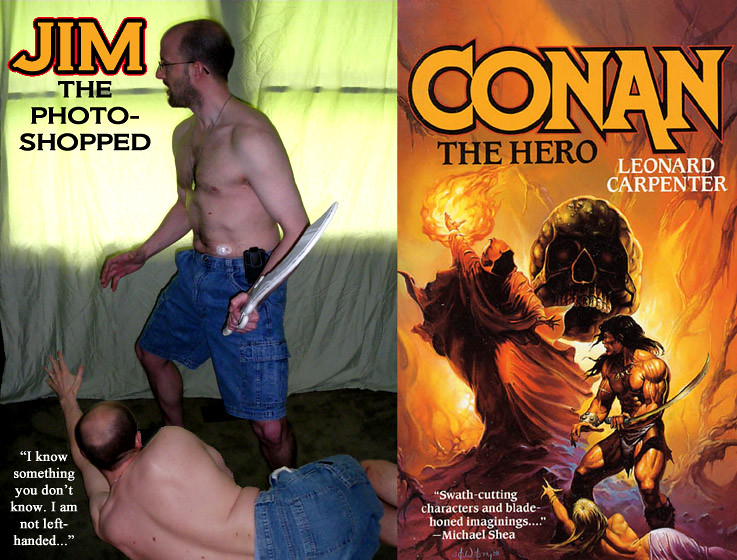 As usual, we’ve got the man in an action pose, ready to go after a random bad guy who set his own hand on fire. (Must be a goblin wizard.) Then you have the woman, pretty much equally naked, but helpless and bent to emphasize the butt. Even lying on the floor, this was one of the more painful poses of the photoshoot, in part because I couldn’t use my left hand to support myself, but I had to keep both my torso and butt directed upward..

So are men objectified and sexualized on book covers? Sometimes, sure … but not in the same way, and not, I think, to the same extent. I’ll admit that going through these poses made me feel like I should spend the rest of the day doing push-ups and sit-ups. But overall, to suggest that the posing of men on covers is anywhere near as problematic as the posing of women seems, well, ignorant and wrong.

As before, thank you to my wife Amy for helping me with the poses and taking the pictures.

Comments and discussion are welcome.