In January of 2012, I decided that I wanted to talk about science fiction and fantasy cover art, particularly the ways women were portrayed. At first, I thought about writing a long blog post, talking about how saturated we were with imagery that emphasized women as sexual objects at the expense of power, agency, realism, and so on.

Then I decided there might be a more effective way to encourage discussion. With assistance and surprisingly little eye-rolling or laughter from my wife, I contorted myself into the poses of women on various SF/F covers.

Things snowballed from there. I did several follow-up photoshoots, ran a cover-posing fundraiser, and was even honored with a Hugo award that year. (Which I accepted with all due dignity.)

I used Flickr to collect all of my cover poses into a single photo set. 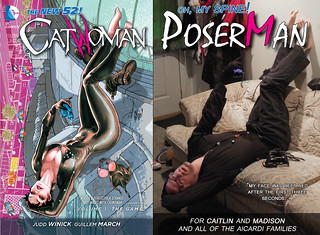 As part of the fundraiser, I promised that if we raised at least $15,000, I’d put together a calendar of cover poses. Well, you donated more than that, which led to the 2014 “Year of the Poser” calendar. These calendars were autographed by me and author Patrick Rothfuss, and every dollar made went directly to the Aicardi Syndrome Foundation.

It’s easy to point and blame the artists, but publishing a book is like making sausage, and there’s an awful lot that goes into the final product. The art director at gives the artist a certain direction. The sales department has ideas about what they need to make it marketable. Bookstore chains have been known to reject books based on covers they didn’t think would sell. Then there are the readers-if they keep buying boob-and-butt books, publishers will keep putting them out. And of course, all of this is happening in a society still struggling with sexism.

There’s a big conversation to be had here, and I believe it’s an important one. I’m both grateful and overwhelmed by the response to this project and the discussion it’s generated.

To be clear, nobody’s saying sexuality is bad, or that poses showing off a model’s body are bad. But wouldn’t it be nice if we could get cover art that

The third and final Janitors of the Post-Apocalypse book comes out August 23, 2022! (Publication was moved back two weeks due to printer delays.)