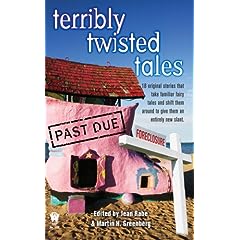 Terribly Twisted Tales [Amazon | Mysterious Galaxy] came out last month.  This is an anthology of twisted fairy tales, so I’m sure you’re all shocked to learn I contributed a story.  But for some reason, I’ve been nervous about this one.  I wrote “The Red Path,” which gave me a chance to explore the origin story for Red Riding Hood from my princess books, but I wasn’t sure it really worked.  So I was happy to find a review listing it among the best stories in the anthology.  (Kelly Swails also gets a shoutout.)

I’m left with another question, however.  I wrote “The Red Path” a year or so back, before even starting Red Hood’s Revenge.  Now that I’m writing the book, I find myself adjusting details of Roudette’s (Red Riding Hood’s) backstory, particularly when it comes to the hunter’s role.

So here’s the question.  Having published this story and written in the author’s note that this character will appear in Red Hood’s Revenge, how bound am I to keep the details of that story?  Given sales numbers on most anthologies, far fewer people are going to read the short story than will see the novel.  Am I allowed to alter published backstory if it improves the book?  Or am I pulling a major Lucas here, violating my own canonical history?  (Red Riding Hood shot first!)

I could use the unreliable narrator approach.  Roudette was a child at the time of that whole wolf/hunter incident, after all.  She probably missed a lot that was going on.  But even then, I find myself adding wordage to the book to explain why her original account was wrong … wordage that doesn’t need to be there for anyone who hasn’t read the short story, and thus will be dead weight for most of the novel’s readers, and should probably be taken out.

I don’t know.  I think my obligation is first and foremost to make Red Hood’s Revenge the best book I can, and if that means compromising the short story, well that sucks beanstalks but I still need to do it.

What do you think?  How would you feel knowing the hunter in “The Red Path” isn’t the same as he is when we get Roudette’s “real” backstory in the book?  What would you do as a writer, and what do you prefer as a reader and fan?