The Sleeping God, by Violette Malan 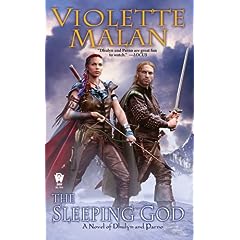 The Sleeping God [Amazon | Mysterious Galaxy], by Violette Malan is a nifty book.

As heroic fantasy goes, this book has a fair amount going for it.  Well-built world and mythology that fits together rather well, badass mercenary protagonists who are more than just caricatures, a sprinkling of secrets and intrigue, and of course, a sleeping god.  Our heroes are mercenary brothers* Dhulyn Wolfshead and Parno Lionsmane, who take a job escorting a young girl back to her noble house but soon find themselves targeted by an ancient menace.

This is not the nifty I want to talk about.

What I loved about this book is the portrayal of Dhulyn and Parno’s relationship.  This is a partnership in every sense of the word, built around a core of love and trust.  As mercenary brothers, the two of them are bound to one another in a relationship as sacred as marriage.

Most fiction tends to show us the beginning of relationships, the eagerness and the passion and the fumbling and clumsiness as people learn more about one another.  All too often, this leads to fairly predictable tension and conflict, misunderstandings and mistrust.  The Sleeping God brings us a more mature relationship, and one of the healthiest relationships I’ve encountered in fiction.  They talk to each other.  They trust one another.  They’ve got each other’s backs.  They’re romantically involved, but the romance isn’t a neverending font of angst and drama.

I asked Malan about Dhulyn and Parno, and she responded:

“So often relationships, especially in fiction though not limited to that, seem to be based on the people not telling each other things.  This is so often the basis of the relationship in romance novels and soap operas, for example (and consequently on the part of living people who think that’s how they’re supposed to act). My idea was to have two people who simply told each other what was on their minds instead of making a hullaballo about hiding things from each other. Of course, it did mean that the tension and the conflict had to come from elsewhere, but I think the story was the better for it.”

Don’t misunderstand.  Malan doesn’t spend the whole book preaching about healthy relationships.  What she does is show us the advantage of Dhulyn and Parno’s partnership.  Individually, each of these fighters is pretty bad-ass.  But put them together and they’ll whoop anything you care to throw at them.

I also liked that the characters go beyond being “just” fighters.  Dhulyn is also a scholar, hunting for new books and theorizing about the evolution of children’s songs.  Parno is … well, that would be telling.  Suffice it to say, he’s also more than he first appears.

It took me a chapter or two to really get into the book, and the plot itself may be familiar to long-time fantasy fans. Mercenaries and ancient gods, dark priesthoods and scheming rulers … there’s almost an old-school fantasy feel to the book.  But then, I enjoy old-school fantasy 😉  I’ll definitely be grabbing a copy of book two, The Soldier King [Amazon | Mysterious Galaxy].

For those of you who’ve read Malan’s work, I’d love to hear your thoughts.  To the rest, what do you think about relationships in fiction?  What are you tired of, and what would you like to see more of?

—–
*Brothers is used as a gender-neutral term.  Dhulyn is female, while Parno is male.

« Why Books as Children is Just Plain Creepy » Canon Fodder