Shadow of a Dead God, by Patrick Samphire 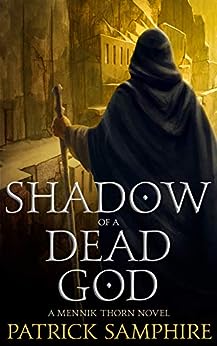 I’ve been trying to get my reading brain back for the past few months. Patrick Samphire‘s new epic fantasy Shadow of a Dead God was exactly what I needed.

It was only supposed to be one little job – a simple curse-breaking for Mennik Thorn to pay back a favour to his oldest friend. But then it all blew up in his face. Now he’s been framed for a murder he didn’t commit.

So how is a second-rate mage, broke, traumatized, and with a habit of annoying the wrong people, supposed to prove his innocence when everyone believes he’s guilty?

Mennik has no choice if he wants to get out of this: he is going to have to throw himself into the corrupt world of the city’s high mages, a world he fled years ago. Faced by supernatural beasts, the mage-killing Ash Guard, and a ruthless, unknown adversary, it’s going to take every trick Mennik can summon just to keep him and his friend alive.

But a new, dark power is rising in Agatos, and all that stands in its way is one damaged mage…

More than anything, this was quick-paced and fun. There’s plenty of action — poor Nik is constantly being blown up, chased through town, threatened, attacked with magical squid, and so much more.

The characters are comfortably familiar and enjoyable. Nik is the underdog who turned his back on the entitled, power-hungry lifestyle of most mages, choosing instead to live in relative poverty as a mage-for-hire. He’s not the most powerful, but he’s clever. Then there’s his best friend Benny, who happens to be a thief, and Benny’s young and potentially murderous but incredibly loyal daughter Sereh.

Samphire spent a lot of time on worldbuilding as well. Every street and neighborhood in the city has its name and history. The politics and economics and history are all deep enough to help drag Nik into deeper and deeper trouble.

There’s a fair amount of swearing and a bit of magical violence, but it never felt dark or gritty.

You can read the first chapter of Shadow of a Dead God on the author’s website.