A week or two back, some GamerGate folks put together the following graphic to try to prove … something. I think this was meant to go along with #NotYourShield, and to show that GamerGate is inclusive and diverse and so on, whereas four of the people who have spoken out against GamerGate are white men. So there!

There are a few problems here, one of which is that whoever put this thing together doesn’t seem to know what “Check your privilege” means. More significantly, if you’re trying to demonstrate that your movement is so diverse and inclusive and welcoming, you’ve got to pay attention to who you put on that pedestal. Otherwise, someone like me might decide to post a modified version of your graphic… 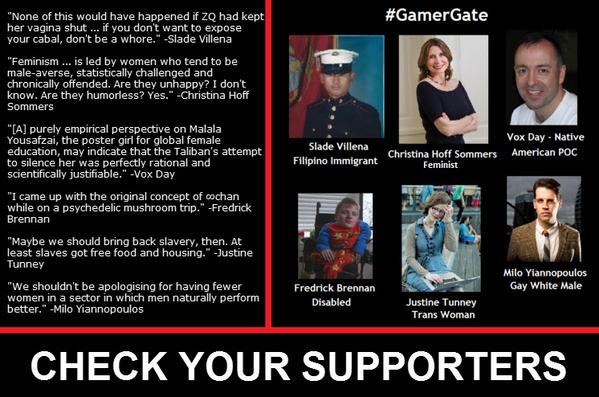 That ended up getting retweeted more than 500 times, and drew a bit of heat from folks associated with GamerGate.

One critique was that Brennan’s quote about coming up with the idea for 8chan while tripping on mushrooms didn’t really fit in with the rest. That’s a fair point, and I agree. Brennan didn’t seem to have the same habit of saying nasty and/or hateful stuff as the others. I included the mushrooms quote because it made me laugh, but I probably shouldn’t have. My bad.

A number of folks claimed that I had taken quotes out of context. Which makes me wonder what context would make things like calling Zoe Quinn a whore acceptable. Of course, while GamerGate folks were busy saying these quotes were out of context, Mr. Villena jumped in to reply to me, saying, “For the record, I STAND BY EVERY WORD.” But I’m sure I’m taking that out of context as well, eh?

One GG supporter wanted to know, “What the f*** does #GamerGate have to do with diversity?” A question which might better be directed at the people who created and are promoting that original graphic.

I was amused to note that these tireless defenders of ethics in journalism also tried (and failed) to get places to cancel author events with me on the basis of my “hate speech” and harassment of minorities, the disabled, immigrants, etc. I’m not sure when pointing out hateful things someone has said became character assassination and hate speech. But I guess the assumption is that being disabled or transgender or gay should somehow shield you from criticism, or from being called on things you’ve said.

The thing is, as certain folks have demonstrated, it’s possible to be both a minority and a bigoted asshat. Weird, huh?

« Legend of Korra 4×1: After All These Years » ICON Schedule