We’re halfway through the month, and the Aicardi Syndrome Foundation fundraiser has brought in more than $7000 in donations. Not to mention sparking more good conversation about sexism in the way women are portrayed and objectified. Thank you all so much.

As before, if any of the pics below bleed off the screen, clicking it should open a new, easier-to-see copy.

This trio of covers included two comic books, because apparently my readers are cruel and sadistic people. As bad as the poses on some covers can be, comics tend to take it even further.

This was more challenging than I expected, mostly I couldn’t hold the pose for very long without all the blood rushing to my head. Also, the dice kept rolling off of me. (When I was changing outfits afterward, a six-sider fell out of my shirt.) And there’s no way I was going to match the angle of her neck and head without breaking a few things.

On the other hand, I kind of like that outfit on me. There’s kind of a Dread Pirate Roberts vibe there. Or maybe that’s just wishful thinking on my part. 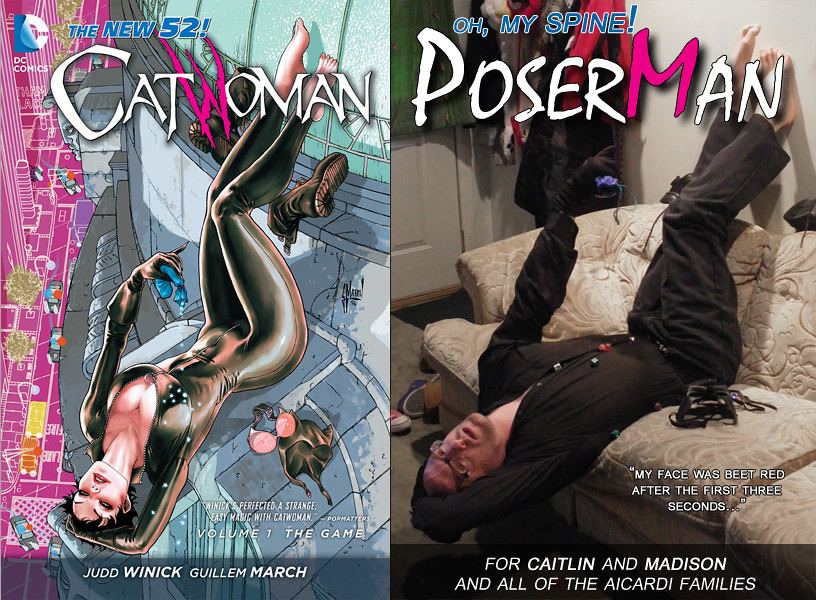 Next up was Fear Itself: The Fearless, Volume 1 #12. Armor like this is absurd in so many ways, and if you don’t understand why, you must immediately go to Women Fighters in Reasonable Armor.

The closest thing I could find to a skintight outfit was my old Star Trek uniform that I happened to have lying around. I was thinking it would–

Yes, I own a Star Trek uniform. I’m a geek. Did anyone not already know this?

Anyway, we tried a few pictures, and my wife said it just wasn’t working without breasts. So she grabbed something from her own wardrobe, I stuffed two play balls down there, and we tried again. The result was … odd. But probably the closest I was going to get to this pose without massive Photoshop abuse. 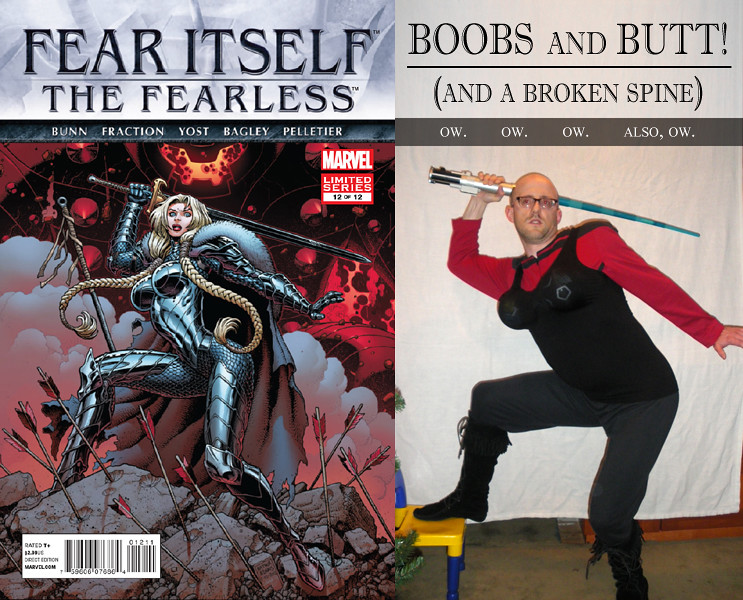 I saved the worst for last. You see, I was foolish enough to let Sarah from Smart Bitches, Trashy Books choose a pose. NEVER AGAIN, SARAH! She emailed back to suggest Johanna Lindsey’s Man of my Dreams. Not the cover itself, which is rather tame. Oh, no. She wanted me to do the inner artwork.

After several minutes of tearful, deranged giggling, I pulled myself together and gave it my best shot. Some of you will be happy to know that this one features the return of the giant stuffed bear. Because the bear isn’t actually mine, I thought it best to wear shorts for this one. Just because, you know, I’ve traumatized my kids enough, and I didn’t want them thinking of … that … every time they saw the bear.

I’m not even going to include this one in the blog. If you want to see me and the bear, each of us attempting both parts of this image, click here.

Much as I talked about in a previous blog post, while the man here is certainly sexualized, he’s also in the dominant, powerful, and significantly less painful position.

There are more poses to come, including my rematch with John Scalzi and the epic group pose at ConFusion, with Pat Rothfuss, Charlie Stross, John Scalzi, Mary Robinette Kowal, and I.

Click. Donate. Make the world better. Guarantee my chiropractor’s job security. And my thanks again to everyone who’s donated and spread the word.

« Wait, What Were We Laughing At? » Choose the Form of the Scalzi