Back from Launch Pad, and a New Essay

I got back from the Launch Pad Astronomy Workshop at about 2 in the morning yesterday. (Huge thanks to my father for driving out to Detroit to pick me up after Delta stuck me with no less than four flight delays, effectively ruining any shot at my connecting flight.)

I’ve got a ton of pictures to process. Not to mention a ton of work to do, and a ton of sleep to catch up on … not necessarily in that order. But here’s one I’m particularly fond of. We were up at the observatory, and someone had an app telling you when the International Space Station would be passing overhead. 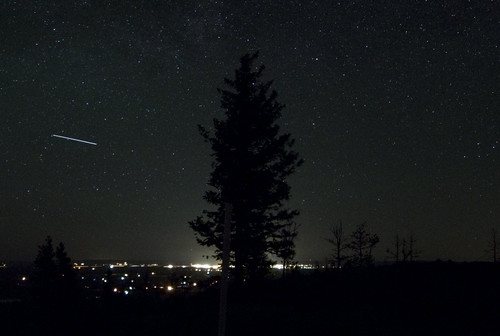 That streak on the left is the ISS. It’s the first time I’ve seen it (at least that I’ve known what it was).

Another thing that happened while I was away was the release of The Usual Path, a collection of essays edited by Shannon Page, about how authors “broke in” to publication. You can pick it up at Amazon, B&N, Indiebound, and the rest of the usual suspects. My contribution is called “The Goblin’s Curse,” and talks about the rather messy process of selling Goblin Quest to a major publisher.

That’s it for now. More to come, including pictures and talking about the Launch Pad experience, once I’ve battled the To Do List back a bit.

« Cool Stuff Friday » Launch Pad Pics, and a Lot of Catching Up