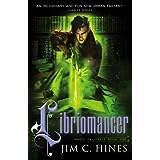 The UK mass market edition of Libriomancer is out today!

The folks at Del Rey UK have been absolutely lovely to work with, and I continue to be thrilled that one of my series finally has a UK edition.

Now on to the more aggravating part. I received a very polite email earlier this week from an anthology editor, asking if I was still planning to contribute a story … seeing as how the deadline was March 1.

And there was much swearing on my part. I had committed to this a year ago, and I knew this anthology was on my list of things to write, but I had somehow gotten it in my head that the deadline was later this summer. (I think I managed to mix it up with another deadline for an anthology that has now been cancelled.)

Regardless, the editor was kind enough to give me until the end of this month to get something written and turned in.

Looking back a few days later, it was interesting to see how this screw-up on my part crashed head-on into the Depression. Being a writer is a pretty core part of my identity, and one of the things I pride myself on is making my deadlines. There’s a line in Friends where Joey snaps, “Joey doesn’t share food!”

Between feeling a bit stressed already with the novel-writing schedule and the realization that I’d messed up, my mood for the day went down like a level 2 thief who lost initiative against a Beholder. The fact that I had also gotten stuck on the novel just made it worse. Look — two different sources of writing stress at once! Oh, joy!

The up side is that I recognized what was happening, and I knew — intellectually — that I was overreacting. Not that I’m okay with blowing deadlines, but it wasn’t the end of the world, and the editor was very cool about it. It wasn’t enough to drag myself out of that slump, but I think it kept me from getting as deeply bogged down by it as I would have a few years back.

I’m not asking for comfort here. I know I’m far from the only writer to ever miss a deadline. I know it’s unreasonable and unfair and egotistical to expect perfection from myself when I wouldn’t dream of holding anyone else to that kind of standard. And I know the best thing to do at this point is let it go and start working on the story.

Which, for the most part, I think I’ve been able to do. It took several days, but I sorted out the novel chapter I was stuck on, and I started brainstorming story ideas for the anthology. I added the new deadline to my To Do List in HabitRPG. And I woke up this morning without the ghost of that Beholder following me around, zapping me with its eyestalk-beams of, “OMG I suck!!!”

It’s still hitting me with various minor eyestalk-beams of life stress, but I’ve got the hit points and saving throws to deal with those. And I’m back in a space where I can enjoy the fact that the new edition of my book is coming out, and people are talking about it and saying mostly good things.