1/21: You can now bid on an autographed 16×16 print of this amazing piece of…art! All proceeds benefit the AFS. Details available here.

Yesterday afternoon at 3:00 p.m., a group of authors set forth on a great challenge. In the hallowed halls of the DoubleTree Hilton, they stripped down and waited patiently while powder was applied to certain overly shiny scalps. Author and photographer extraordinaire Al Bogdan prepared his hand-painted backdrop, set up his camera and flashes, and laid out the rubber raft.

The time had come. John “Waffle-man” Scalzi, Patrick Rothfuss, Charles Stross, and I took our places around Mary Robinette Kowal. We had come to Dearborn not for the glory, but to fulfill a promise made weeks ago, that if the good people of SF/F fandom raised at least $5000 for the Aicardi Syndrome Foundation fundraiser, we would attempt to duplicate the cover of Young Flandry.

The fundraiser brought in more than triple that amount. And thus did the five come together, prepared to endure great pain and sacrifice all dignity to support a very worthwhile cause and simultaneously try to point out that, darn it all, some of our SF/F are just ridiculously sexist, you know?

I’d like to thank ConFusion for hosting our photoshoot and reveal, the other authors for being such wonderful fun and good sports, and Al for donating his time and expertise.

And now, my good internet, ARE YOU READY?

Behold, in all its glory, the results of the ULTIMATE COVER SHOOT! 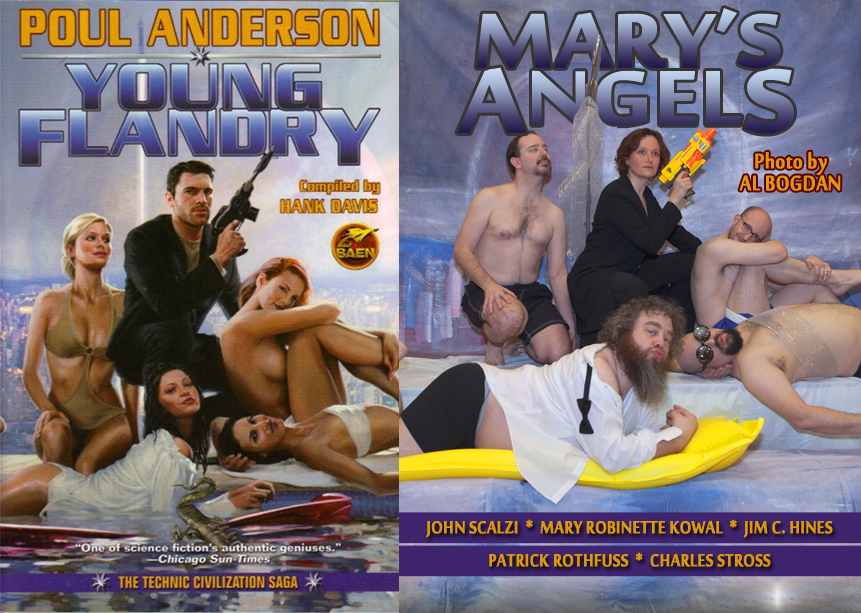 That’s Mary’s Hugo award filling in as our slightly off-kilter rocket, by the way.

Once I’m home and recovered from the con, I’ll have an additional surprise to announce about this picture 🙂 But for now, I hope this made your weekend better.