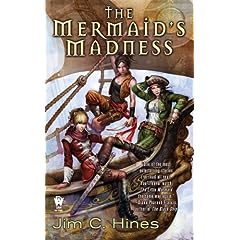 As requested, here is your more-or-less official discussion thread for The Mermaid’s Madness [Amazon | Mysterious Galaxy].

Because my blog mirrors to different places, I’d suggest going either to LiveJournal or http://www.jimchines.com/2009/10/mermaid-discussion-post/ for the liveliest discussion.

If you haven’t read the book and don’t want to know what happens, stay the heck out of the comments.  Otherwise, all discussion, speculation, and questions* are welcome.

It’s here!  Today marks the offical release of The Mermaid’s Madness [Amazon | Mysterious Galaxy]!  Which means I’ll be pretty much useless for the next few days, as I go through the hyperactive bipolarity of book launch insanity, checking Amason rankings, Googling reviews, preparing for the book launch party (Thursday evening at Schulers-Eastwood in Lansing), and so on.

This is going to be a crazy week.  I’ll do my best to avoid getting carried away pointing out awesome reviews or linking to giveaways or the 10/12 contest at Bitten By Books where you’ll be able to win one of 12 DAW anthologies or a grand prize of a complete set of painted goblin miniatures.

Likewise, I promise not to spend the entire week linking to my web site, where you can read the first chapter of the book online, or plastering the synopsis over every post like so:

There is an old story — you might have heard it — about a young mermaid, the daughter of a king, who saved the life of a human prince and fell in love.

So innocent was her love, so pure her devotion, that she would pay any price for the chance to be with her prince. She gave up her voice, her family, and the sea, and became human. But the prince had fallen in love with another woman.

The tales say the little mermaid sacrificed her own life so that her beloved prince could find happiness with his bride.

(I also promise most entries won’t be as long-winded as this one.  But hey, I’ve got a book out today!  I’m allowed one day of excited babble, dammit!)

My thanks to everyone who participated in the one-question interviews.  I’ll be adding questions and links as they go live, and you can click over to read the answers.

Finally, as long as you’re going book-shopping, check out these other new releases:

I’m still taking interview questions.  I’ve got a dozen or so good ones, but nothing silly yet.  Knowing y’all, this surprises me.  If you’re interested, e-mail a question at mermaid@jimchines.com and I’ll add you to the drawing to win a copy of Strip Mauled.  All I ask is that you post the Q&A on 10/6 when Mermaid officially comes out.

This was what I saw Sunday afternoon in the SF/F section at Schuler Books in the Meridian Mall.  Isn’t it a beautiful sight?*  That little hand belongs to my son, who lit up at the sight of Daddy’s books on the shelf.  He was almost as excited as I was.

Of course, he got bored fast when he had to wait for Daddy to sign everything.  But then I took him back and showed him the dedication page for Goblin War.  He read the letters one by one, and all the energy came rushing back.  “That’s me!”  Then he looked up at me and asked, “Why is my name in your book?”

It’s a good question, and got me thinking about the dedications I’ve done, and why.  In part, dedicating a book is a gift I can give that feels special.  But there’s more.

Goblin War: To My Son

Stepsister Scheme: To My Daughter

Mermaid’s Madness: To My Wife

I didn’t know how to explain all of this to a four-year-old.  So I just told him it was because I loved him, and that I’d explain it more when he was older.  He seemed content with this.  But the whole thing left me feeling unusually sappy, so I thought I’d share with you all.

But forget about me.  A few of my friends have books out this week.  Let’s talk about them.

Treason’s Shore [Amazon | Mysterious Galaxy] is the fourth and final book in Sherwood Smith’s Inda series.  Check out her LiveJournal announcement for details about the book and the series, or just head over and congratulate her.

This week also marks the release of Vanished [Amazon | Mysterious Galaxy] by my JABberwocky buddy Kat Richardson.  (katatomic on LJ.)  Vanished is the fourth Greywalker novel, for the handful of you who don’t already know about the series.  Richardson has an excerpt of the novel posted on her web site.

Finally, we have C. F. Bentley’s novel Enigma [Amazon | Mysterious Galaxy].  This is the sequel to Harmony.  Bentley describes the books as “a spiritual journey with a literary twist in a space opera landscape.”  Bentley is one of my fellow DAW authors, and you can find her at her web site or on LJ as ramblin_phyl.

I’ll also give a shout out to James Van Pelt’s story collection The Radio Magician and Other Stories [Amazon | Mysterious Galaxy | B&N]. This one doesn’t come out until 9/1/09 (and I don’t think the Amazon or MG links work yet, but the B&N one does).  I’m only about 1/3 through, but … well, let me put it this way.  I was tempted to stop reading the thing, because I got through the first two stories and was embarrassed that I’d ever tried to write short fiction.  I’m behind on my reviewing, but I will be posting a review of this one later.  Van Pelt also posts some great writing-related stuff at jimvanpelt.

So what else is out that we should know about?  What have you been reading lately that you loved?  Let’s just make this an open book-chat thread, because I don’t think I’ve done that in a while.

Practice is supposed to help you improve, right?  The more you practice a process, the easier it becomes.  Yet I’ve talked before about how each book seems to be more challenging than the last.  From speaking to other published authors, I know I’m not the only one hitting this apparent paradox.

So just for fun, I thought I’d break down the books and figure out some of the major challenges and lessons I had to learn from each one.

Goblin Hero: 1st sequel.  Had to figure out how much to summarize from book one.  Also added a second PoV character, with her own plotline.

Red Hood’s Revenge: Stepping out of the pseudo-European fantasy feel into a different cultural context.  Working with sustained plotlines and character developments that carry through 4 books.

Having thought about this stuff way too much, it’s not that writing gets harder the more you do it.  Instead, I see two factors.  (Okay, two and a half.)

1.  I’m writing more ambitious books.  Goblin Quest was a blast, but it’s not the most complex plot, and there’s only one PoV character.  I suspect that if I were to go back and write a similar book, it would be a lot easier than the current work in progress.  (Being stubborn, I suspect I’ll just keep getting more ambitious until my brain explodes, though.)

2.  I’m more aware of the different aspects of writing.  Compare it to karate.  The first time you go, you learn some basic moves.  “Look ma, I’m punching and kicking!  Go me!”  But the more you practice, the more you become aware of things like stance, breathing, the proper way to make a fist, how far to extend your punch, the snapback after an attack…  With time, a lot of that becomes instinctive, of course.  But for every aspect that becomes automatic, you discover three more new things.

Please understand that I’m not complaining.  I love what I do.  I’m just trying to understand this phenomenon.  I’m still young in my career, so I don’t know how things will evolve over the next 10, 20, or 30 books.  (Yes, I’m an optimist!)

Have other people found the same increasingly steep curve?  Or maybe it’s my memory playing tricks on me.  This novel always feels like the hardest one to write because it’s the one I’m doing right now, and I forget how hard the last one was.  (I’ve heard there’s a similar phenomenon with pregnancy and childbirth, actually.)