Several decades ago, I acquired the piano sheet music for the Star Trek: TOS theme song. This was the classic soundtrack, the original 60s score by Alexander Courage.

I sat down at my piano, opened the music, and was shocked to discover not only the musical notes, but the lyrics. Words written by none other than Gene Roddenberry himself.

I’m sure some of you know about this already, but for the rest of you, here are Roddenberry’s lyrics to the original Star Trek theme:

Beyond
The rim of the star-light
My love
Is wand’ring in star-flight
I know
He’ll find in star-clustered reaches
Love,
Strange love a star woman teaches.
I know
His journey ends never
His star trek
Will go on forever.
But tell him
While he wanders his starry sea
Remember, remember me.

Wow. Those are certainly…words. They have syllables and everything.

But it gets better. According to Snopes, the lyrics were a way for Roddenberry to claim half of Alexander Courage’s royalties for the music.

“Pressured by Roddenberry, Courage had made a “handshake deal” a couple of years earlier that gave Roddenberry the option of composing lyrics for Courage’s Star Trek music (and Courage signed a contract — unknowingly, he later claimed — to that effect). Roddenberry exercised that option, writing lyrics for the main theme and then asserting his right to half the performance royalties as a co-composer. It made no difference that the lyrics were not intended to be used in the show itself and had never been recorded or released. As the lyricist, Roddenberry was entitled to an equal share of the royalties, whether or not the lyrics were ever used.”

“Courage protested in vain that although the arrangement may have been legal, it was unethical: Roddenberry’s lyrics added nothing to the value of the music and were created for no reason other than to usurp half the composer’s performance royalties. An unsympathetic Roddenberry proclaimed, “Hey, I have to get some money somewhere. I’m sure not going to get it out of the profits of Star Trek.””

This has been your random bit of geek history/trivia for the day.

Friday is gonna try to cut back on social media time today and maybe get a little writing done.

::Peeks out from beneath my Protective Blanket of Fear::

Is 2020 gone yet? (Yes, I know “2020” is an arbitrary construct, and the troubles of the past year aren’t going to magically disappear, but I’m using the new year as a psychological Cure Psychic Wounds potion to give me a boost for the coming months.)

Anyway, for thirteen years now, I’ve done a write-up about my income as a SF/F author. Money is often a taboo subject in the writing field, and the common belief is that “successful” writers are Stephen King levels of wealthy, and the rest are poor enough to be Dickens characters.

In 2016, instead of a personal income write-up, I did a survey of almost 400 novelists about their income.

My Background: I’m a primarily “traditionally published,” U.S.-based SF/F author with 14 books in print from major New York publishers. The first of those books came out from DAW in 2006. I’ve also sold about 50 short stories. I’ve never hit the NYT or USA Today bestseller lists, but my last five books have been lead titles for my publisher. In late 2015, I mostly-quit my full-time day job, switching to 10-15 hours/week for the State of Michigan, and spending the rest of my time writing and as stay-at-home Dad.

In December 2018, my wife was diagnosed with an aggressive form of lymphoma. She fought hard for nine months, but died in August of 2019. This devastated pretty much every aspect of my life, including my writing.

Because writers also need to consider insurance and benefits, I’ll note how fortunate we were that I’d kept that part-time day job, which included a continuation of my health insurance. The original plan had been to switch over to my wife’s insurance through her work … which would have ended in early 2019, leaving us with much higher medical bills.

2020 in Summary: I mean, 2020 sucked for pretty much everyone, yeah? I struggled pretty hard finding the energy and motivation to write. I generally like to write hopeful, fun stories, and let’s just say the past year was not a hopeful, fun mood.

That said, I was able to finish Terminal Peace, the third and final Janitors of the Post-Apocalypse book. My editor hasn’t gotten back to me yet about revisions on that, which means I haven’t received the deliverance portion of that advance.

I did, however, get paid the final chunk of my advance for Terminal Uprising when the paperback came out at the start of 2020.

The other big project for 2020 was a Kickstarter for my middle-grade fantasy Tamora Carter: Goblin Queen. That brought in around $14,000 … most of which went right back into actually producing the finished book.

I consider myself a relatively successful writer, overall. But as you can see, success isn’t exactly a linear thing…

It looks like I had about $7500 worth of expenses this year, almost all of which were Kickstarter-related. (I’ll be finding a few more expenses once I work on my taxes, so that number will go up a bit.) And there were close to $3000 in estimated quarterly tax payments.

2020 Breakdown: The two big sources of income were the publication payment for the Terminal Uprising paperback and the Kickstarter for Tamora Carter: Goblin Queen. Income that was directly from the Kickstarter has its own category. Sales of the book after the Kickstarter ended are bundled into the self-publishing category.

Patreon was a new thing this year. Huge thanks to everyone who’s been supporting me there.

The audio category includes the advance for Goblin Queen to two different audio book publishers (one for an unabridged version, and one for an abridged, dramatized version).

Short fiction is for royalties on a couple of stories that are still earning their keep years later. That’s unusual, but I’ll take it!

Looking Ahead: I won’t tempt fate by making predictions about 2021, but I’m hoping to accomplish a few things, writing-wise:

We’ll see how it goes. Like most of us, I’d really, really love to get back to something approaching “normal,” whatever that looks like.

I hope this has been helpful. As always, please feel free to share the post and ask any questions. I’ll do my best to answer.

Welcome to the 300th Cool Stuff Friday post! Friday wishes you all a better year than last one…

I haven’t done a virtual reading in a while, and it’s time to change that!

On December 23 at 7 p.m. Eastern Time, I’ll be reading my Rankin Bass fanfic “Crimson Frost” over on Facebook Live.

For those who haven’t read this one, I should warn you it’s not for little kids. The story started from a random comment about Frosty vs. Rudolph, and escalated into a full-blown north pole war. I’d describe it as twisted fun.

Hope to see some of you there!

Friday is hoping for good drive-in weather next weekend for Wonder Woman!

Friday has had a discouraging couple of days…

The Were Chronicles, by Alma Alexander

We’ve all been having a rough 2020. Without going into details that aren’t mine to share, author Alma Alexander has had a particularly rough time of it lately, which has made it difficult to do things like promote her new book that came out today. 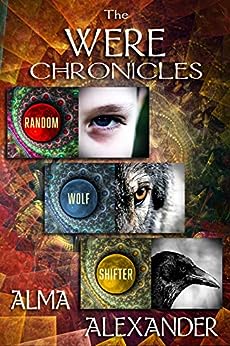 As you might have guessed from the post title, the book is called The Were Chronicles. It is, in fact, an omnibus of three novels: Random, Wolf, and Shifter.

Everything I knew about the Were was wrong…

A Were of no fixed form, a Random, able to Turn into any warm-blooded creature it sees…

A young Random whose failure to Turn forces him into taking his destiny into his own hands and becoming full Lycan in the name of pride and fury, learning things he never thought were possible…

A true Shifter, the wild card, Turning into anything he chooses at will…

Together, they work to turn back a shattering tragedy, solve a conspiracy-shrouded mystery rooted in their own kind, and work to preserve their own existence against a rising tide of superstition and hatred.

All they wanted to do, in the end, was save a life. Instead… they started a war.

I haven’t read this one yet, so I’ll let author Tamora Pierce help draw you in with the following quote: “You will never read another shapeshifter book like this. Every surprise will catch you unwary. And, like me, you will find that others will have to pry it out of your fingers.”

I have read other work from Alexander, though. Looking at one of my old reviews, I used words like “magical” and “masterful.”

You can read a sample for yourself over at Book View Cafe.

Purchase links: Book View Cafe, Amazon  (The Amazon link has it listed as a pre-order with a 12/16 release date, but it’s live and available at BVC as of today.)

Friday missed last week’s post, so we threw in some extra links this morning.

I’ve always shied away from doing direct book sales, but after getting through the Kickstarter earlier this year, I feel like I’ve got a fair amount of the work figured out. And in doing my Christmas shopping, I find myself going to author sites to see if they do direct sales of autographed books.

So I looked through my stock to see what I had excess copies of, and posted the following for sale.

This is U.S. only for the moment. Shipping is media rate. All books can be signed and personalized. And supplies are limited.

Goblin Queen is a trade paperback. The rest are hardcovers.

I’d have loved to get Libriomancer added as well, but when I looked, I was almost out of hardcovers of that one. D’oh! Don’t you hate it when bookstores only have the later books in a series, but not the first one?

I may add more books down the line as I continue sorting through the shelves in the office. And depending on how much work this ends up being.

I think everything is set up correctly. Shipping options were a bit of a pain, but they should be sorted now. Please let me know if you find anything weird. Thanks!