When Tinker Met Bell – An Interview with Alethea Kontis

I wrote a blurb for one of Alethea Kontis‘ books a while back. As I recall, it said simply, “Alethea Kontis is fairy tales.” Having met her, I’m 99% sure she’s a genuine fairy princess slumming in the human world. I mean, just look at this video of her reading from When Tinker Met Bell. 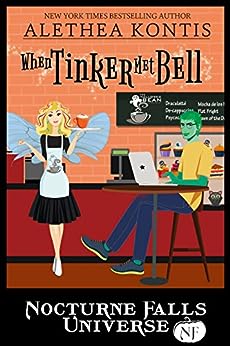 Which brings us to the point of this post: she has a new book out this week called When Tinker Met Bell [Amazon | B&N | Kobo | iBooks]. A book that brings together fairies and goblins. Unlike my own attempt at bringing these two species together, Alethea’s goblins don’t end up eating the fairies. Here’s the official summary:

Bellamy Merriweather Larousse isn’t like the other fairies at Harmswood Academy, with her giant wings and their magical dust. “Southern Bell” works as a barista at The Hallowed Bean to help pay her tuition and remains active on the cheering squad, despite her insistence on associating with the unpopular crowd. Every day is sunny in Bellamy’s world and every cloud has a silver lining. The only way to upset Bell’s stalwart optimism is to threaten one of her misfit friends…or try to take one of them from her.

Unbeknownst to everyone–including him–outcast Ranulf “Tinker” Tinkerton is about to be named heir to the throne of the Goblin King, making him ruler of his fellow Lost Boys and the labyrinthine city they inhabit. Now that the time has come for Tinker to leave Harmswood behind, will he be brave enough to share his feelings for Bellamy? It’s no secret that he’s held a torch for her since the fourth grade, but no matter how long they’ve been friends, goblins will always be allergic to fairies.

I invited Alethea to answer a few questions about the story…

When I was writing my goblin books, I considered trying to write a romantic plot thread. It…didn’t work. At all. How did you manage to make goblin romance work?

You and I are so very similarly minded…and yet backwards! You wrote goblins before princesses—I wrote fairy tales and ended up falling in love with goblins. I suspect the way I managed to make a goblin romance work is also because I came at it from the opposite end.

I knew two things when I started writing this book: That it would be a humorous romance (like all the Nocturne Falls books), and that the title would be When Tinker Met Bell. “Bell” was Bellamy Larousse, my optimistic cheerleader fairy barista. Tinker needed to be her opposite, of course…to me that meant goblins. And yet, despite their many differences, Tinker and Bell still manage to be the best of friends.

When Tinker Met Bell ended up being a little When Harry Met Sally, a little Romeo and Juliet, and a little Labyrinth, with a lot of my high school experience thrown in. Because of that, it may very well be my favorite book I’ve ever written (just don’t tell the Woodcutters!).

Why do you think goblins get such a bad rap?

In my goblin mythology, it is orphaned boys (mostly humans) that become goblins. Incorporating Peter Pan’s Lost Boys threw me down a fascinating rabbit hole of research that led to the Lost Boys of the Sudan and Spain. But I also did traditional “fairy tale” goblin research. Hans Christian Andersen has two goblin tales of note, “The Goblin and the Grocer” and “The Goblin and the Woman.” I have a complete HCA in my library, translated from the Danish by a man from Denmark (Erik C. Haugaard). I was surprised to find that, in this translation, the stories were “The Pixy and the Grocer” and “The Pixy and the Gardner’s Wife.”

This variation on the word made me consider the very question you’re asking. I think “goblin” or “hobgoblin” was particularly used to refer to a pixie/sprite who was mischievous/bad/greedy in nature. There are fine lines when trying to define the fae—most are impish and tricksy and will cause trouble if they don’t get their bowl of milk at the end of the day. But “goblin” does seem to always be used as a pejorative term. That bothered me quite a bit, on behalf of goblinkind.

I’d like to explore this more in the Goblin City novel I plan on writing soon… It’s up to authors like you and me to set the record straight!

How much of Bellamy’s personality and background are based on your own experience as a fairy princess?

I’m very glad that you asked this question, for it gives me the opportunity to confess: I am not the original Princess! My Obi-Wan Kenobi is Dr. Casey Cothran, Associate Professor of English at Winthrop University…and my editor.

Casey and I met when we were eleven, in the summer right before seventh grade. She was a tiny blonde cheerleader, a bright ball of sunshine beloved by everyone. I was a washed up former child actress with no friends—a poetry-loving closet-Goth. And yet, Casey and I were kindred spirits from that first moment. We were both avid readers of fantasy, loved the same books and movies, and we both dreamed of one day being writers. One of my very first novels was an epic fantasy starring a young girl named Princess Casey (I was Llogan, the Queen of Thieves). Without Casey’s optimistic influence, I might have succumbed to the darkness. I had some particularly difficult teenage years. I honestly don’t know if I would have survived without her.

I have gone by many other names in my life. I was a sprite named Crescent. I was the Queen of Thieves. I was the Goddess of Most Things. I was a Fairy-Godmother-In-Training who earned her wings and grew into a Fairy Godmother For Real. “Princess Alethea” originated almost a decade ago as a joke on a name tag at a childhood friend’s rehearsal dinner, and then a handle on Livejournal. But the nickname spread like wildfire across the genres, and even into my own family. It seemed that the world needed a true Princess, and I knew exactly how to fill that role. Because I had been raised by one.

Everything I know about being optimistic, inspirational, loving, selfless, and kind, I learned from Casey. She is 100% Bellamy Larousse, complete with Southern accent and everything. I am…everyone else in the misfit D&D party: Natalie, Hubble, and Tinker. Even Sam. But definitely Tinker. In so many ways, When Tinker Met Bell is our story.

What’s your favorite thing you had to cut from this book?

Right around Chapter Nine, I could feel that something was wrong, so I sent the book to Casey. She read it and emailed me back to say, “Can you really quick write an entirely new book about two characters named Tinker and Bell? Because this book is too good and you need to keep it for yourself.”

On the one hand, that’s a fantastic comment to hear. On the other, I am not a fast writer, and deadlines were looming. The revision of those nine chapters was incredibly difficult for me to do. I had to cut a lot of worldbuilding, and one of my favorite characters. The only reason it didn’t break my heart completely was that I promised myself that after I finished my third Nocturne Falls book (Besphinxed, January), I would go back and write a Goblin City book that included all the storylines I had to omit.

I hesitate to tell you anything because I hate spoilers, but I will tell you a little about Crook, because he was my favorite character that I had to cut. Crook is a young goblin, one of the Lost Boys. He has two club feet, an affliction that might have been corrected had he not been given up on as a baby. He also has an affinity for slight-of-hand tricks, and imagination the size of the moon. Crook somehow figures out how to manipulate the massive store of magic that lies beneath the Goblin City—a talent that, until then, only ever belonged to the Goblin King. And…that’s all I can tell you right now!

Finally, and most importantly: are there any fire-spiders?

I am happy to report that there are NO fire spiders in this adventure. But it does contain a Midwinter Masquerade, a magic mirror, and a wayward troll named Crunch. You are going to LOVE Crunch!