• Thank you to everyone who’s offered new and autographed books for the DV Book Drive.  I’ll be continuing to collect books through about mid-December, at which point they will be delivered to the shelter.

• I’m still taking entries into the Mock Cover Contest, too.  I’ll pick the top entries and put those up for a vote early next week.

Way back when, after I sold Goldfish Dreams to a small publisher, I started hunting for blurbs. I was fortunate to get some great ones, but I remember the individual who e-mailed to say he hadn’t read the entire book, but offered a blurb anyway.  Better still, when I pointed out that his blurb contained spoilers, he invited me to just rewrite it however I saw fit.

I’d like to say I took the ethical path and declined.  Alas, I was young and desperate. I rewrote the blurb, e-mailed it to him for approval, and slapped his name on it.  I rationalize it by saying at least he approved the blurb, but it’s not my proudest moment as an author.

Years later, I was reading Julie Czerneda‘s comments about blurbs. I can’t remember exactly how she said it, but I came away thinking of blurbs as a contract, a matter of trust between reader and author.  If a blurb from me has any impact at all, it will be because you’ve read my work, and you trust me as an author.  You trust that I wouldn’t recommend something I didn’t like.

Over the past few years, I’ve begun getting more blurb requests, which means I’ve had to decide how I’m going to approach this.  I find myself thinking about that blurb I got for Goldfish Dreams, and the one I got from Julie for Goblin Quest [Amazon | Mysterious Galaxy].  Guess which one means more to me?  Guess which of these two individuals I want to be like.

That’s led to some uncomfortable moments.  I’ve had to tell several friends that I couldn’t blurb their books for one reason or another.  Sometimes the book just didn’t work for me.  That makes for an awkward conversation, but I also try to be honest. 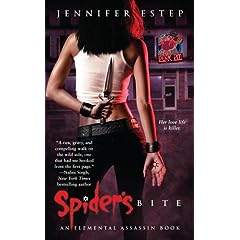 I had a different experience a few months back.  Jennifer Estep sent me an ARC of Spider’s Bite [Amazon | Mysterious Galaxy], which comes out in January.

It’s not a bad book.  I like the idea of using elemental magic in urban fantasy.  Gin has the strong female thing going, which I generally enjoy.  And the story is definitely a page-turner.

I still declined to blurb it, and a part of me continues to wonder if I’m overthinking it.  Spider’s Bite, like a fair amount of urban fantasy, is a pretty “adult” book.  There’s violence and bloodshed, as well as fairly graphic sexual content.  It’s a very different style than my own work, and that’s where I hesitated.

If my name were to show up on the cover, what would that signal to my readers?  What expectations does that create?  Will someone pick up this book expecting light, fun fantasy like Jim Hines writes?

I’m sure there’s overlap between Estep’s readers and my own.  People read a wide range.  And It’s not like my blurb is going to scar some innocent, wide-eyed young reader for life by tricking them into reading sex and violence.

But I wasn’t comfortable with it, and I’m continuing to try to understand where that’s coming from.  On that note, I would love to hear your thoughts on blurbs.  What is and isn’t appropriate, what works and what doesn’t, and so on.  As an author, where would you draw the line?  As a reader, what makes you lose trust with a blurbing author?

« DV Book Drive » Why My Books are Not My Babies