Just a Geek, by Wil Wheaton 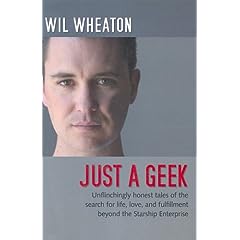 It was early 2004.  I had just signed a deal with Five Star to publish Goblin Quest.  This would be my first published fantasy novel, hopefully bringing me one step closer to actually Making It As A Writer.  With Five Star being a small specialty press, I was on my own when it came to blurbs.  So I e-mailed a few people I knew.  On a whim, after reading one of Wheaton’s blog columns about gaming, I wrote him a quick e-mail.

Six hours later, I bounded away from the computer, grabbed my wife by the arms, and said, “Holy @#$%, Wil Wheaton said he’d read my book!”

Not only did he read it, he provided my favorite blurb ever, calling Goblin Quest “Too f***ing cool for words!”  He also hooked me up with John Kovalic, who went on to provide another blurb.

It’s hard to put into words how much that meant.  I was a nobody in the writing world. I had friends signing deals with major publishers, and I was with a press that might sell 500 copies if I was lucky.  I felt like a fraud, and I was terrified people were going to find out.

Having Wil Wheaton agree to read the book, and his follow-up e-mails saying how much he enjoyed it … well, it didn’t make the crazy go away, but it helped.  It helped a lot.

So now it’s five years later, and I finally got my hands on Wil’s book Just a Geek [Amazon | Mysterious Galaxy], a collection of blog posts and original material chronicling Wil’s decision to leave Star Trek, his efforts to find work in Hollywood, the struggle to balance career and family, and his eventual decision to give this writing thing a try.

I’ve read his blog for years, so I knew he was a good writer, and I fully expected to enjoy the book.  What I didn’t expect was how much I would relate to the stories he shared.  How many of you writers out there can connect to this:

The hundreds of adoring fans I’d hoped to see did show up . . . when people like Kevin Smith and the cast of the short-lived Witchblade took up temporary residence at tables near mine.

Yep.  That could be me at one of several group booksignings I’ve done next to folks like John Scalzi or Mike Resnick.  Or how about:

I would often be one of the final two or three actors to be considered.  But consistently coming in second or third was actually worse than not making it past the first round of meetings.  It was like scaling Mount Everest, only to die within sight of the summit . . . over and over again.

I think every writer goes through this stage, where we’re getting “Almost, but not quite” rejections and going bugnut insane trying to figure out why we can’t make the cut when we’re so freaking close.

There were other pieces that jumped out at me.  Wil mentions legal battles with his stepsons’ father, and the overwhelming lawyer bills that come with them.  (Been there, done that.)  He writes about choosing bewteen going with his family on a vacation or staying home in order to make it to auditions.  (Some of you might remember when I missed half of my family vacation in order to make the deadline on Mermaid.)

The point is, it’s an aptly-named book.  There’s a blunt honestly to the writing.  You don’t feel like you’re reading about a celebrity; you’re reading about a guy who, like most of the folks reading this review, is just a geek (albeit one with 10,000 times as many Twitter followers as most of us).  If writing is about creating a connection between author and reader, then Wheaton is a damn good writer.

If you’ve read his blog, you know Wil Wheaton can write.  Just a Geek shows he can do it at book-length, tying individual stories and blog entries together into a larger story, one which starts with Wil Wheaton trying to Prove to Everyone That Quitting Star Trek Wasn’t A Mistake, and ending with Wil Wheaton, Author.

The book comes out in paperback at the end of this week.  Check it out.