I’m trying an experiment. For the next 48 hours, I’m going to offer direct sales of the hardcover of Terminal Alliance, the first book in the Janitors of the Post-Apocalypse trilogy.

I’ve generally avoided doing direct sales, because of the time involved. But, well, I gotta have *some* way to pay for the rest of this tattoo! 😉

Today is the official release of the paperback edition of Terminal Alliance. Yay! This means you can now pick up your mass market copy for only $7.99. It also means the e-book price has dropped to match the mass market. Yay again!

Feel free to pick up a copy in the format of your choosing:

You can also read the first chapter in whatever format you’d like, as long as it’s one of these three: PDF, EPUB, MOBI

Today marks the official release of Terminal Alliance, book one of the Janitors of the Post-Apocalypse trilogy!

My thanks to everyone who has supported, encouraged, reviewed, and generally just been wonderful and awesome during the writing and production of this book. It’s currently available in hardcover, e-book, and audio. I believe the mass market paperback should be coming in about a year.

Care to read the first chapter? We’ve got you covered:

The reviews I’ve seen so far have been great! Here’s a sampling…

Finally, I should have some guest posts and interviews and such going live over the next few days. I’ll add those links here as they appear.

I hope you all enjoy the story.

One Day to Launch!

Only one day until the official release of Terminal Alliance! The blog and the rest of my social media will probably be a little promo-heavy this week. I’ll do my best not to be too obnoxious about it.

Also, an apology. Ilona Andrews’ name is misspelled in the Author’s Note. I’m annoyed about this — it’s my own fault. I managed to spell Gromgimsidalgak right, but messed up Ilona. Bad writer!

This is a good month for new books. In addition to mine, we’re getting books from Fonda Lee, Tim Pratt, Mira Grant, Joe Zieja, Charlaine Harris, Deborah Blake, and so many more.

What else are you excited to read this month?

ETA: Congratulations to Mel, chosen by the Random Number Generator to win the ARC of Terminal Alliance. And thank you to everyone who donated.

Two weeks ago, Sophie received advance review copies of Terminal Alliance. I’ve been meaning to do a giveaway, but I was struggling to come up with a good way to do it. 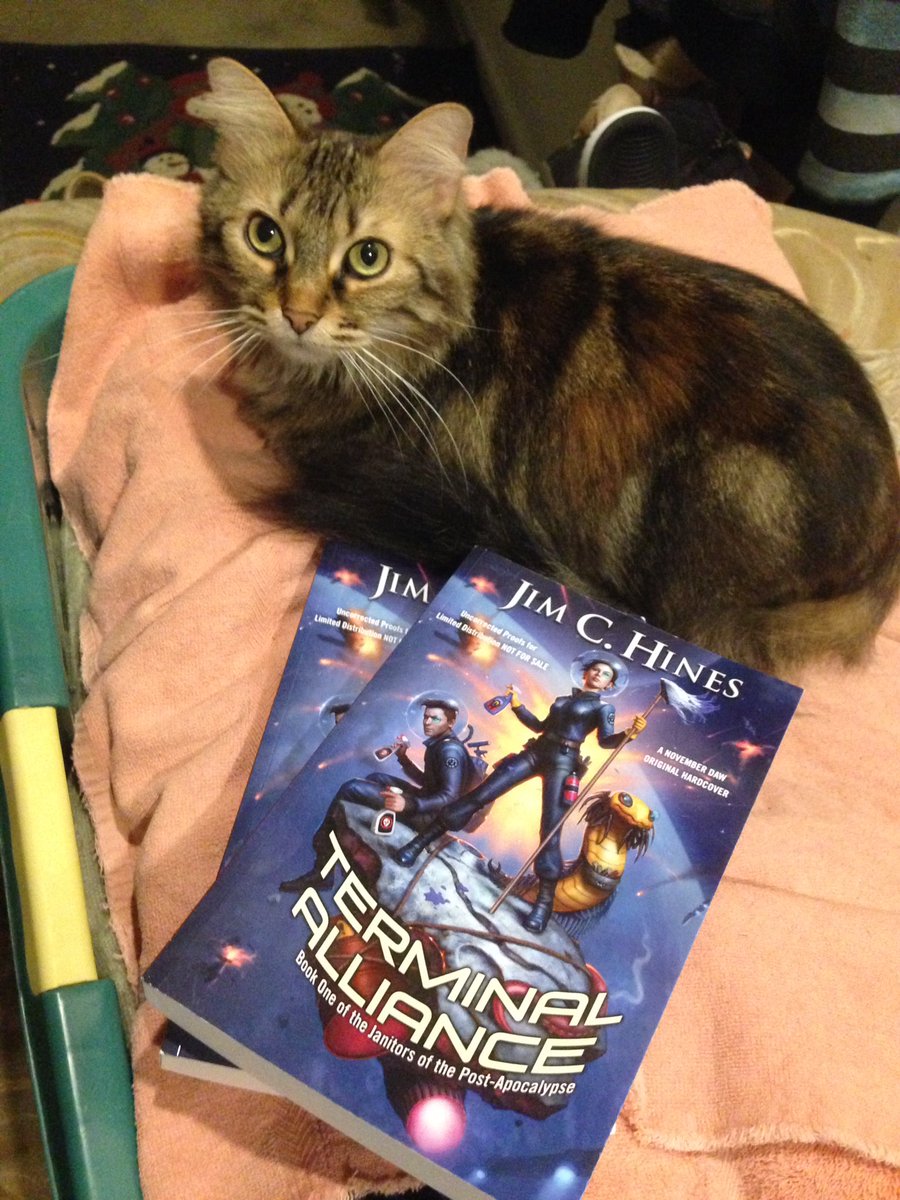 Then I started seeing the damage reports come in from hurricanes and flooding. The devastation they’ve left in their wakes, and the devastation yet to come. A million people without power in Puerto Rico. Record-breaking rain and flooding in the southwest U.S. 41 million affected by flooding and landslides in South Asia.

And now I know how I want to do this giveaway. You want to win an autographed ARC of Terminal Alliance? There are two things you need to do.

I don’t need receipts or anything like that. I trust you. And there’s no minimum donation, either. I know money is tight for a lot of people. If you can afford to give $100, great. If you can only afford $1, that’s great too. It adds up, and it all helps.

Here are some organizations to consider, though this is in no way a complete list.

I’ll draw one winner at random toward the end of next week.

Newsletter subscribers got to see this last week, but for everyone else, I’ve posted the first chapter of Terminal Alliance for your reading enjoyment!

The Book Smugglers are hosting the cover reveal for my next book, Terminal Alliance. While you’re admiring Dan Dos Santos‘ artwork, you can also enter to win an autographed copy of one of my published books!

I’m really happy with this one. I think it captures the feel of the book, and Dos Santos had a marvelous take on the ship’s computer tech Gromgimsidalgak (Grom) — that’s the yellow alien on the right.

The book comes out on November 7. But, of course, you can preorder any time you like! 😉

State of the Jim: Terminal Alliance, Invisible 3, and More

Life has been…let’s call it hectic. A random sampling of recent excitement includes a minor car accident (everyone’s fine), a $200+ insurance mix-up (I think they’re straightening it out now), a podcast interview (I’ll post links when it goes live), increased work at the 10 hours/week day job, and more.

All manageable, but there’s been an ongoing sense of running without ever getting a chance to stop. (Though Amy and I did sneak out to see Logan earlier this month. Yay!)

And then there are the various writing-related projects. Here are the updates on those!

As some of you may have seen, the official release date for Terminal Alliance has been moved back to November 7. This is on me. Writing my first science fiction novel has taken longer than I anticipated, and I’ve needed additional time to make it as good as possible.

Happily, I turned a complete manuscript in to my editor last week, and am now working on final revisions. Everything is on schedule for that November release, and I’m happy with how the story and characters have turned out.

I’m particularly happy with the cover art Dan Dos Santos did for the book. The big cover reveal has officially been scheduled for this coming Monday, March 20. I can’t wait to show it off! There should be a giveaway to go with it.

Mary Anne and I have responded to all but five submissions, and we’re hoping to get back to those people within the next week. I’m really excited about the essays and poems we’ve accepted so far. We don’t have a firm schedule yet, but I expect we’ll see some of the essays as guest blog posts next month, with the anthology going on sale in either late April or May.

I revised and returned a story called “The Fallow Grave of Dream” for the anthology The Death of All Things. The story has not been officially accepted or rejected yet, but regardless what happens, I’m very proud of this one. It’s short — only 2700 words, and the first story I’ve ever done in present tense, second person. It’s about death and dreams and disability and family and love and hope and despair, and it’s just really different from anything I’ve done before. One way or another, I look forward to sharing it with you.

Several people pointed out that the pre-order page for Terminal Alliance doesn’t yet have any information on the story, and it might be nice to know what they’re ordering. Dang…people are so picky, you know?

Anyway, I’ve updated my website with the following description. This isn’t the final, official synopsis, but it’s what I sent my editor for their sales meeting, and is true to the manuscript I’ll be finishing up and turning in.

When the Krakau came to Earth, they planned to invite humanity into a growing alliance of sentient species.

This would have worked out better for all involved if they hadn’t arrived after a mutated plague wiped out half the planet, turned the rest into shambling, near-unstoppable animals, and basically destroyed human civilization. You know—your standard apocalypse.

The Krakau’s first impulse was to turn their ships around and go home. After all, it’s hard to establish diplomatic relations with mindless savages who eat your diplomats.

Their second impulse was to try to fix us.

A century later, human beings might not be what they once were, but hey, at least they stopped trying to eat everyone. Mostly.

Marion “Mops” Adamopoulos is surprisingly bright (for a human). As a Lieutenant on the Earth Mercenary Corps Ship Pufferfish, she’s in charge of the Shipboard Hygiene and Sanitation team. When a bioweapon attack by an alien race wipes out the Krakau command crew and reverts the rest of the humans to their feral state, only Mops and her team are left with their minds intact.

Escaping the attacking aliens—not to mention her shambling crewmates—is only the beginning. Sure, Mops and her assortment of space janitors and plumbers can clean the ship, but flying the damn thing is another matter. As they struggle to keep the Pufferfish functioning and find a cure for their crew, they stumble onto a conspiracy that could threaten the entire alliance.

Preorder my Next Book and/or Win an Older One!

Two quick announcements today as I try to keep up with everything else.

Announcement the First: Terminal Alliance, the first book of my Janitors of the Post-Apocalypse series, is now up for pre-order with a tentative release date of August 1, 2017. Insert anxious/excited author squeak here.

Announcement the Second: Klud the goblin will be sending out another newsletter soon. I think this time I’ll pick a random subscriber to win an autographed copy of my collection The Goblin Master’s Grimoire. If you want to get in on this, you can sign up for the newsletter at https://groups.google.com/forum/#!forum/goblin-updates/join or by sending an email to goblin-updates+subscribe@googlegroups.com.

Newsletters come out approximately once every three months, with information about new books and stories, appearances, and random snark from me and/or Klud.