On my first day at Les Imaginales, a pair of librarians came up and invited me to visit the Epinal Library. What I didn’t realize — they may have mentioned it and I just missed it — was that they were giving us a private tour of the rare books room. 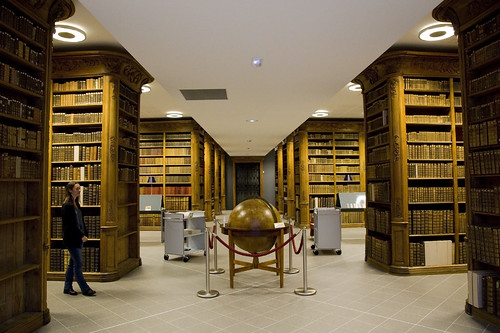 It was amazing. One of the true highlights of my trip to France. My interpreter Lionel, an author himself, was as awestruck as I was. Especially when they brought out the first book. If I’m remembering right, this was from the 8th century. 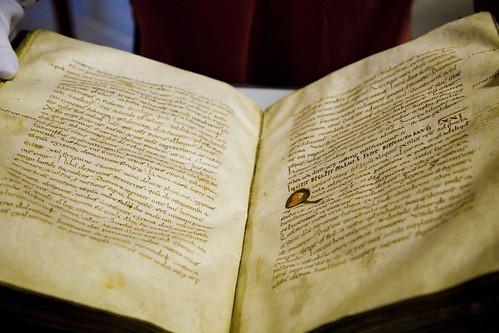 The next one wasn’t quite as old…being from the 9th century. This Gospel of Saint Mark was a youthful 1200 years old. 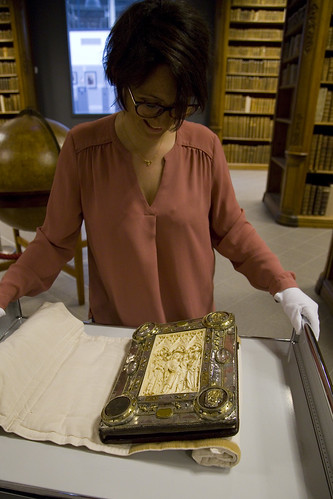 The cover is metal and ivory. I’m not sure what kind of jewels those are. The circular areas on the corners were for holding relics. Here’s a glimpse of the interior: 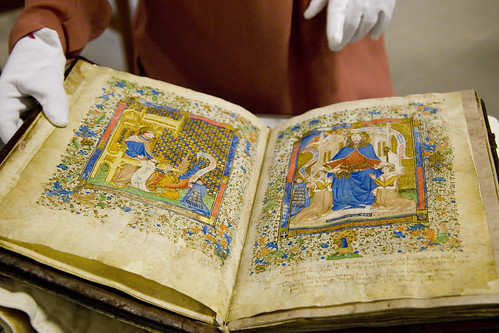 You can see the full set of photos on Flickr. (Or you may have already seen them on Facebook.) It was such a wonderful experience. My thanks to everyone at Bibliothèque Municipale d’Epinal for their time and generosity.

I’ll end with a map of Michigan from one of the books that was “only” a few centuries old. Michigan sure looked different in the old days… 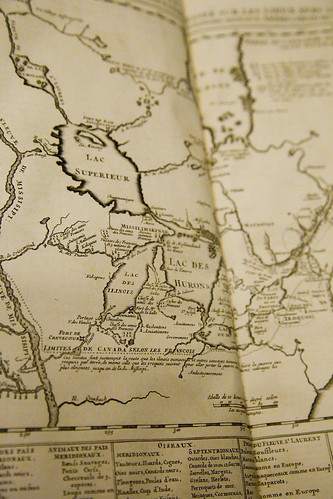 Back from Les Imaginales

I got back to Michigan late on Monday after a wonderful week in France for Les Imaginales.

The festival was amazing. The whole town participates and helps to sponsor Les Imaginales, which felt like a cross between a book fair, convention, and renaissance festival. The town is gorgeous, the food is delicious, and there were dogs everywhere–even in restaurants or sitting under a table in the book tent 🙂

I’ve posted photos from the book fair on Flickr. I’ve got a bunch more to get through and post, but I’m doing them one batch at a time.

The best part, naturally, was getting to hang out with some wonderful author friends from America, and to meet new authors, fans, editors, and fellow geeks from France and elsewhere.

It was fascinating to see the differences between French and American conventions. The panels were very different. Instead of a free-for-all conversation, the moderator asked each author a question, one at a time. There wasn’t much interaction between the authors. It felt a bit more formal, but also made sure everyone got the chance to talk and contribute. You were also expected to talk a fair amount about your book and how it related to the topic. At home, I try to avoid doing that too much, but in France, it’s expected that you’ll talk about your writing and help the audience learn enough to decide whether or not they’re interested.

Which means the best time to be in the book tent is immediately after you’ve done a panel. (I didn’t figure that out for my first panel, and probably missed some sales since I didn’t immediately go to the tent afterward. D’oh!)

I’m still trying to get caught up on everything. In the meantime, have a few pictures. (Or check out the full album on Flickr or Facebook!)

My thanks to everyone at the festival for inviting me, for their hard work organizing the event, and for making this such a delightful week.

Next week, I have the honor of being part of Les Imaginales, the international festival of fantasy literature in Épinal, France. In fact, I’m doubly honored, since Le Bibliomancien (the French edition of Libriomancer, translated by Lionel Davoust) is one of six finalists for the Prix Imaginales award in the foreign novel category.

Les Imaginales has posted my schedule for the fair. Here’s everything I’ll be up to in France:

Wait, what? Is Google translating that last panel correctly? What kind of festival is this?

Anyone know of any good bodyguard services in France?