Friday is thinking of trying to do NaNoWriMo this year!

Friday finally found an in-network OT to help with the hand.

It’s been six days since the surgeon opened up my hand to try to restore movement to the pinky. At that point, the Dupuytren’s contracture had progressed to where I only had about 30° of movement. (Click the link for a lovely photo.)

This was causing trouble with things like reaching into a pocket or putting on a glove. It was also messing with my typing. When I finally met with the surgeon, he said I should have come in before it got to this point. Earlier on in the progression, they can do less invasive procedures to help. At this point, there wasn’t much to try except for surgery.

The surgeon said things went pretty well. He was able to get the fingers pretty much straight, though they may not stay perfectly straight as they heal. I was bandaged up and put in a splint to try to hold the finger straight as much as possible.

I went back after two days, so he could remove the initial splint and take a look. He also removed the drains, the little plastic straw-like things. This was around the point that I went into shock for a few minutes. Felt like I was going to throw up, broke out in sweat. Fun stuff!

Once I recovered, I got my first real look at the incision and stitches. Just in time for Halloween season. We switched to a remoldable splint that I could take off to do stretches and therapy.

I go in on Wednesday to get half the stitches out. Eventually we will start cutting back on how much I have to wear the splint. I’ll probably have it on for overnight for a while yet, though. Everything seems to be healing fairly well so far. He doesn’t think I’ll get full movement back, but I’m pushing to get as close as possible.

I am able to drive and do most things I need to do, but not everything. I’m doing this blog post on my phone using voice dictation, which is a pain. And I really want to be able to start typing and working on book stuff. I’ve also had to stop most of my exercise routine for now.

Mostly, I’m just bored and frustrated and ready to be doing stuff again. It’s giving me a lot more sympathy for how frustrated Amy used to get when she was recovering from her knee surgeries.

The worst part? I was all ready to tell people I had a lightning bolt scar because I stopped a killing curse with my bare hand. But with everything JK Rowling has been going on about lately, I really don’t feel like doing a lot of Harry Potter references. Any other suggestions for good lightning bolt scar stories?

Friday is the start of Virtual ICON!

As of this afternoon, almost all of the Kickstarter rewards for Goblin Queen have been mailed out!

There are only 8 people left for me to take care of, and I’m waiting on them to check and respond to their email. In most cases, these are folks who didn’t complete the Kickstarter survey, so I don’t know where to actually send their rewards.

I also have a bunch of donated copies to mail out. I’ve sent the first three, but the bulk of those may end up waiting until post-surgery.

Having signed and mailed 300+ books, all I’ll say is that I’m very much looking forward to letting my publisher worry about distribution for whatever book I write next 🙂

Friday would like to remind you to wear a mask.

Let’s start with the book stuff. Happily, the bulk orders for Goblin Queen were printed and shipped more quickly than the proof copies. These twelve boxes arrived last week from IngramSpark, and since then I’ve also received the order from Amazon. 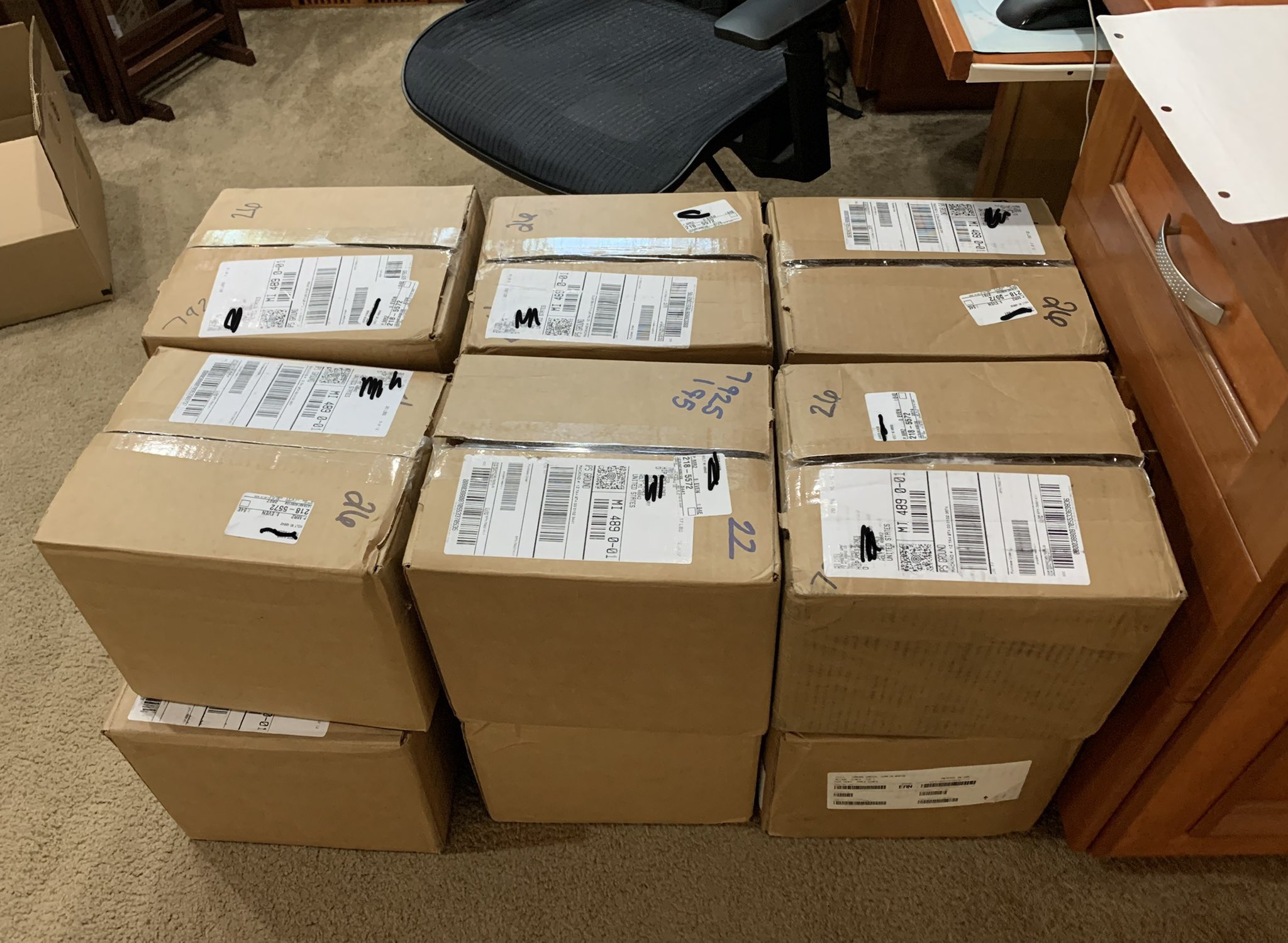 So I’ve been spending most of my free time signing and shipping books. As of this afternoon, I’ve gotten a little over half of the backer rewards dropped off at the post office. My goal is to get the rest of them done before October 12, because…

…on the morning of October 12, I’m going in for surgery to try to fix the Dupuytren’s contracture in my right hand. This has been developing for years in both hands, but it’s still relatively minor in the left. The right, on the other hand (heh), well, at this point I can only extend the pinky about 30 degrees from the palm.

We’d originally planned on me getting this taken care of back in 2019, but other family medical issues took priority. At this point, the surgeon doesn’t think I’ll get full motion back, but hopefully I’ll get most of it. If nothing else, after I’ve healed from the surgery, I should be able to type more easily, put gloves on, reach into my pocket, etc — all things that have become increasingly annoying in recent months.

I’ve also been playing with a pitch for my next book. I’m still pulling the details together, especially the ending, but the plan is to do a standalone contemporary fantasy. No goblins at this time, but a lot can change between the pitch and the finished book 🙂

One of the many cool benefits of being an author is getting the chance to read other people’s books before they’re published. Earlier this summer, I was given the opportunity to read Juliette Wade‘s Transgressions of Power, the second of her Broken Trust books.

Of course, before I could really get into it, I had to read the first book, Mazes of Power.

Having now finished both books, I can safely say … when is the next one coming out?

The books are described as “sociological science fiction.” They’re set primarily in the cavern city of Pelismara — most people on this world live underground, though we do get glimpses of people working on the surface. The reader is thrown into the deep end of this world, and it could probably be a little disorienting for newer readers of SF.

But it’s effective, too. Curiosity drew me in, and Wade has developed so many layers of her world that there was always something new and interesting to learn.

Probably the most striking aspect of the books is the detailed and rigid caste system. Our protagonists are mostly Grobal, the ruling caste. Arissen are soldiers and guards, Imbati are servants, Kartunnen artists, and so on. It makes for very uncomfortable reading at times.

Over the course of the two books, we see some characters challenging and pushing back against the caste system, and in book two, you start to see more of the resentment and anger from people not of the Grobal caste. But for most of the characters — at least those in the Grobal caste — this system is a simple fact of existence. The Grobal race is superior, and to “Fall” to a lower caste is a fate worse than death…

The two most powerful positions are the Eminence and his Heir. Book one deals with Heir selection, and the political battles that play out. There’s plenty of intrigue, assassinations, bargains and betrayals, and endless manipulation. Without spoiling things, book two has a similar plotline that escalates the stakes even more.

There’s so much more going on. Nekantor of the First Family, the main antagonist, has untreated Obsessive Compulsive Disorder he has to keep hidden. (A proper Heir candidate shouldn’t have such a “weakness.”) The First Family wants power, but Nekantor’s brother Tagaret knows how evil and cruel Nek can be…just like their father, in many ways.

And then there’s romance, cross-caste friendships, more intrigue, upper-caste characters coming face-to-face with their privilege and the realities of the lower castes, love and loyalty, heroism in large moments and small alike.

These are complex, thoughtful books that kept me engaged throughout.

You can read an excerpt of book one on the publisher’s website.

It’s Tuesday, September 15, and that can only mean one thing: 3rd Quarter Estimated Taxes are due today for me and my U.S. author friends!

But also, Tamora Carter: Goblin Queen is out today!

This is my first Middle Grade book, as well as my first Kickstarter project, and I’m so happy with how everything turned out.

The audio book editions are in production, and I’ll let the world know as soon as those are ready. But in the meantime, you can order the ebook or print version online or from your local bookstore.

Unlike my original goblin trilogy, this one is set in the “real” world — in a mid-Michigan town, where three kids have gone missing, including 12-year-old Tamora Carter’s best friend Andre. When Tamora bumps into a couple of goblins after roller derby practice one night, she gets caught up in the magic and mayhem of two worlds and sets out to save her friends.

Here, have some reviews:

“The characters in this book are so wonderful that you can’t help but root for them to persevere. They’re smart and clever, but they’re also kids, a fact that the book doesn’t lose sight of.” –History that Never Was

“This was so much fun! A fierce roller derby-playing heroine in modern-day Michigan meets up with goblins, pixies and more after her best friend is sucked into another world. I loved the twist on standard portal fantasies (as this heroine is the one left behind when three Chosen Ones are taken through the portal to fulfill an ancient prophecy – but she is NOT about to let her best friend be lost to any elven prophecies). I also loved the clever twists on fairy lore and the combination of very real-feeling (and funny!) goblins with modern life and the equally real-feeling Michigan setting. (And OMG I loved the dragon!)” -Author Stephanie Burgis

“No matter what age he writes for, this is one author who never fails to enchant me. I loved this book. The characters read like real kids, which isn’t always easy for an author to achieve.” -Author Deborah Blake

You can read the first chapter if you’d like to get a feel for the book, or jump straight into these convenient order links:

Thanks to everyone for their support and encouragement along the way!

Hey Jim – When is Terminal Peace coming out?

The third Janitors book was delayed first by family medical issues, and then by COVID. However, I've turned in the manuscript, and the book is on DAW's schedule for August 2022.

Thanks so much for your patience and understanding. I'm hoping to get back to a much more regular book release schedule in the coming years.